Guitar lessons cover many genres inside this musical form of the blues. Blues guitar developed from the African-American community & can be sad in the Delta style from the deep South, or happy in the Piedmont ragtime guitar style of playing which is evident in all forms of modern jazz, rhythm & blues.

Between the two there are a group of acoustic blues guitar players who used many standard chord progressions to play with a definite swing, sill using blues notes, but a step up from the standard twelve bar blues.

Big Bill Broonzy and Brownie McGhee are two great examples of blues men who excelled at adapting traditional blues verses, using shuffles, walking basses and all the usual tricks but giving it that certain 'groove'; almost like rock and roll. The five lessons in this course take a look at just one of McGhee's songs - Livin With The Blues, and four of Broonzy's.

If you can play one of Brownie's acoustic blues songs, you can just about play them all! Both men were country blues singers originally, further developing what was basically the music of Africa evolving through field hollers and spirituals, particularly after the ending of slavery. Their swinging style of blues became a firm favorite in juke joints, together with Delta blues and the appealing Piedmont (ragtime blues.)

What You Will Learn in these acoustic guitar lessons:

1. How to finger pick acoustic blues guitar in the distinctive swing style.

2. Palm damping techniques to ensure that the sound is 'tight'!

3. The chord structure of swing blues in the keys of E, A and C

4. How to reproduce that elusive 'old blues guitar' feeling.

Broonzy's style was much broader and we take a look at several of his songs in some detail.

Both men use a fingerpicking style called 'monotonic bass', which means that the thumb strikes just one bass guitar string every beat, instead of alternating between two or three strings.

It's less complicated than alternating bass fingerstyle blues, but that's not to say the guitar sound produced isn't as rich or musical. Both men were very inventive in their treatment of the blues, and the bass action helped drive the music forward in a very definite and unique way.

Each lesson is between 20 mins and 30 mins long and provides everything you need to play the songs presented, including slow close up demos of both hands, tips on singing and printable guitar tab files. Acoustic blues lessons in the swing style just got easy - learn blues guitar now! 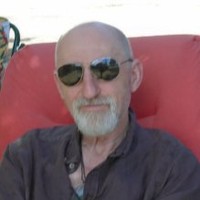 The scope of Jim's divers courses reflect his interest and proficiency in many subject areas. Earning a living online for 10 years now, his interests span topics such as on page SEO, to creating blues guitar lessons, to writing novels and movie scripts, to Wordpress Tutorials.

Writing primarily in the science fiction genre, Jim Bruce, is fascinated with the possibilities that this type of fiction brings, but also in the actual craft of screenwriting.

Jim devoured his dad's collection of science fiction books at an early age, often reading collections of short fiction collected together under titles such as 'Fantastic Stories', or 'Look To The Stars' under his bed covers way into the night.

The possibilities, the 'what ifs' of sci-fi provide Jim with the enthusiasm to live life to the full - anything is possible, and there are more things in the great out-there than we can possibly write about. Curiosity is the spur that drives him on to create, not just fiction, but political comment, music and poetry.

Born in the North of UK in 1950, where he attended schools in Creswell, Nottinghamshire and Shirebrook. He has had more jobs than he can remember, including working in the coal mines, teacher, electrician, mechanic, circus laborer, farm hand, channel tunnel engineer, industrial robot programmer, website builder and professional blues guitar player/teacher.

He has been resident in UK, USA, Germany, France and Portugal, where he currently lives and writes.